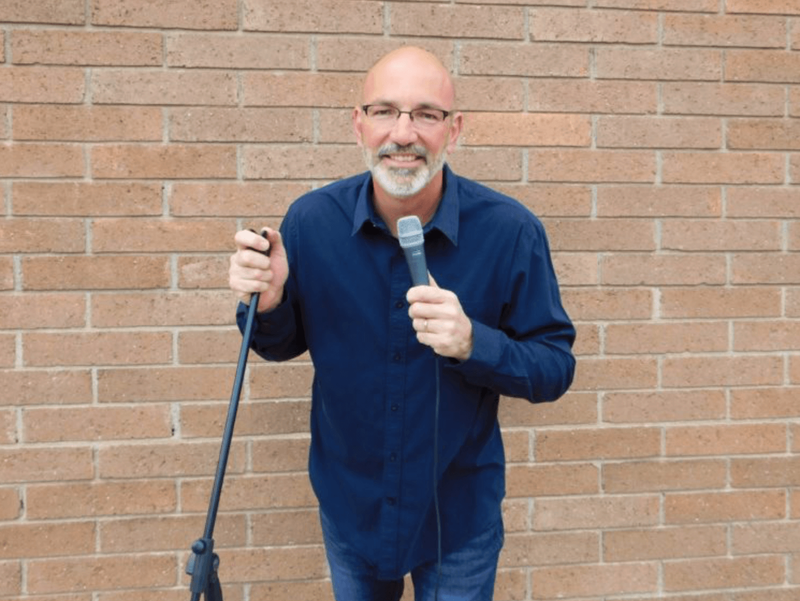 A Second Act Full of Laughs: Comedian Paul Diedrich’s road has been littered with detours

During the past few years, local teacher-turned-comedian Paul Diedrich has thrilled audiences at every comedy club in Arizona as well as on the road, touring through Washington, Nevada, California, New Mexico and Colorado.

This month, he will release his first comedy album, “Teachable Moments.” We sat down with him to learn a little more about his winding road to the funny.

Ironically, his early life wasn’t much of a laughing matter.

“I am the third of four children. For a large part of the 1970s, we were gypsies (well, homeless). Plus, when I was a kid, I didn’t understand that we were homeless. I thought other people lived like we did,” Diedrich says. “My dad was a Marine—a veteran of the Bay of Pigs. After he was discharged, he waged a constant battle with undiagnosed mental illness and diagnosed physical disabilities. I spent a lot of time in VA hospital waiting rooms as a kid.”

At one point, Diedrich’s dad decided the family of six would live in a car and travel to all 50 states.

“By the time I was 8, we’d visited 48 of the 50 states and sort of settled into the quiet little town of Dawson, Minnesota,” Diedrich says. “Through charity, we lived in a house owned by the Catholic Church.”

Then his dad had a new dream. Living rent free, he decided to use his Social Security payments to purchase land by a lake in rural Minnesota and build a house—with no electricity or running water.

“Dad moved there and lived in a tent while building. I remember mom being miserable, but dad was living his dream,” Diedrich says. “And then he passed away.”

Over the next five years, Diedrich’s mother—with no college degree, no sustained work experience and no money—followed her extended family from one city to another, living off their charity and accepting piecemeal jobs.

“I started working when I was nine. I graduated high school at 16, moved out at 17 and worked for minimum wage as a night stocker at Toys R Us,” says Diedrich, who worked hourly jobs until he exhaustedly moved to Arizona to join his mom in 1993, where she’d moved a few years prior.

Once in the Valley, he began a job at Chili’s, where he met his future wife, Carrick Bray.

“She talked me into attending community college, then Arizona State University. I graduated at 28 with a degree in marketing and took a job in corporate sales,” Diedrich says. “But it didn’t feed my soul.”

At 35, after seeking help for mental health issues inherited from his father, he decided to make a change and went to school to become a teacher. By 39, he owned a home, was happily raising two children with Carrick, and was working as a P.E. teacher at a local school.

“It was then, when I finally felt settled, I figured it was time to face my greatest fear: putting myself out there for public judgment,” Diedrich says. “I had always thought I could write and be clever, so I decided to cross stand-up comedy off my bucket list before I turned 40.”

He took a workshop at a small comedy club and basically freaked the heck out doing it the first seven weeks.

“The underarm sweat I produced during that time would fill a children’s play pool. I got through it with the essential help of Dee Ann Kinkaid. If it weren’t for Dee Ann, I would have probably tried an open mic one time, curled up into a fetal position and cried,” Diedrich says.

The eighth week of the workshop was a student showcase show, and Diedrich shined. Based on his performance, he was hired by the club owner to perform in a real, professional show.

“That was the greatest $20 I had ever earned, because I earned it by facing something that scared me,” Diedrich says, noting that work at other clubs across the Valley soon followed. “Some nights I felt like Superman with illusions of greatness. Other nights I felt like I did when I was 10, thinking I was worthless and that nobody liked me.”

But he was hooked and kept at it. Diedrich settled into a groove of performing at the same club regularly and worked his way up to doing longer sets. Then, he met Frank Caliendo in 2015.

“We actually coached flag football together for our kids. I didn’t mention to Frank that I did stand-up for over a year of knowing him. I thought it would be like telling Michael Jordan, ‘Hey, I played a little ball in seventh grade.’ Eventually, we became friends and I shared it with him,” Diedrich says.

Caliendo then helped Diedrich write some jokes and paved the way for Diedrich to cross a couple more items off his comedy bucket list.

“Some things I didn’t even know were on my list until I did them, like flying in a private jet to a show in Seattle. Or, what became a passion: producing fundraising comedy shows to benefit nonprofit organizations via a company called Comedy Roadshows.”

While working as a full-time teacher, Diedrich performed at a casino show in California when the headliner asked Diedrich why he hadn’t yet made an album.

“I ended up wondering the same thing. Why not me? So, I recorded my first comedy album, ‘Teachable Moments,’ which comes out in April.”

“I deal with adult themes in a clever, funny way without straying into obscenity. I discuss marriage, parenting, owning rescue dogs, teaching and other random stuff I think is funny, including my unique childhood,” Diedrich says.